HomeLatest NewsNewsResearch Seminar: “Why so many rules” – Dr Morgan Clarke 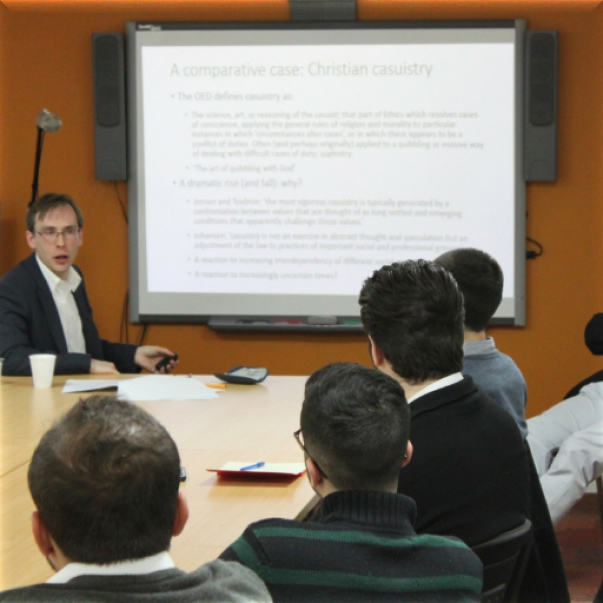 On the 22nd of March 2018, Dr Morgan Clarke presented a research seminar on “Why so many rules? Thinking about the reasons and consequences of legalistic approaches to religious ethics”.

The seminar started with Dr Clarke speaking about his own research in the fields of Islam and Bio-ethics and his field work in Lebanon in relation to this topic. He then outlined why religions or religious people follow or have many laws, and what impact may that have at a sociological level. He discussed how the notion of being religious is linked to following laws. The study conducted by himself was primarily focused in Lebanon and in particular with the followers of Sayyid Fadhlullah. A comparison was also made with other religions and similar structures that are in place such as in Christianity there is the notion of probabilism, and rigorism and whether or not that is present in the Shia faith.

The seminar ended with a Q&A with members of the public, students and staff contributing to the topic.

Dr. Morgan Clarke is an anthropologist of the Arabic-speaking Middle East with a particular interest in contemporary Islam, especially Islamic law and its relationship to positive law, secular ethics and the civil state. His fieldwork to date has been in Lebanon (2003-4, 2007-8). His doctoral work (Oxford, 2006) focused on Islamic bioethics, concerning assisted reproduction in particular, and was published as Islam and new kinship: reproductive technology and the shariah in Lebanon (Berghahn, 2009). His subsequent and current work examines the social life of the sharia and Islamic religious authority more general.

CIMS: 'Tawassul (Intermediation) in the light of the Islamic Tenet of the Sole Authority of God'