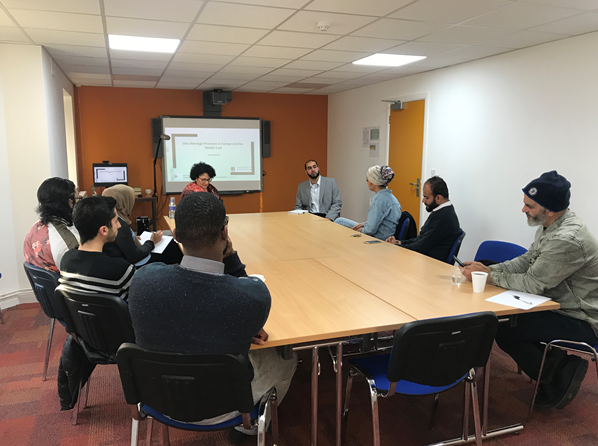 On Thursday 23rd November 2017, Al-Mahdi Institute held a Research seminar on the topic of; “Shia Marriage Practices in Europe and Mid-East” conducted by Dr Yaffa Shanneik from University of Birmingham. The seminar was attended by AMI students, faculty and many interested members of the public.

An abstract of her research reads;
“Muslim marriages have been the focus of public debates and academic research. However, very few studies examine Muslim marriages within its transnational and European migratory context looking at its cultural, political and religious dimensions. Since the 1980s, the large scale displacement of Iraqi Shia Muslims forced them to migrate and settle in various countries in the Middle East and Europe. This paper examines marriage practices among displaced Iraqi migrants in the UK. Only few studies have examined this group and less so by investigating their marriage practices as a way to preserve their cultural memory (Warburg 2000). The paper is based on Pierre Nora’s concept of lieux de mémoire which refers to spaces, objects or events that have a significant meaning to a particular groups’ collective memory (Nora 1989). This paper examines the transcultural aspects of cultural memory expressed in marriage practices such as rituals, images and objects among Iraqi Twelver Shia in displaced settings in the UK as examples of transnational lieux de mémoire. The paper is based on ethnographic fieldwork conducted in the UK and the Gulf between 2014 and 2017”

Dr Yafa Shenneik is a Lecturer in Islamic Studies at University of Birmingham. She has completed her BA (Jordan), MA (Germany) and PhD (Germany) and was previously a lecturer at the University of Chester and the University of South Wales.  Her research focuses on the dynamics and trajectories of gender in Islam within the context of contemporary diasporic and transnational Muslim women’s spaces. She works on Sunni and Shia women communities in Europe and their transnational links to the Middle East and also has a particular research interest in the authority and leadership of Muslim women and the changing nature of women’s participation in religious practices in Europe and the Middle East. Her current research focuses on Muslim marriage practices and policies in Europe and the Middle East.

To view more images from the seminar click here