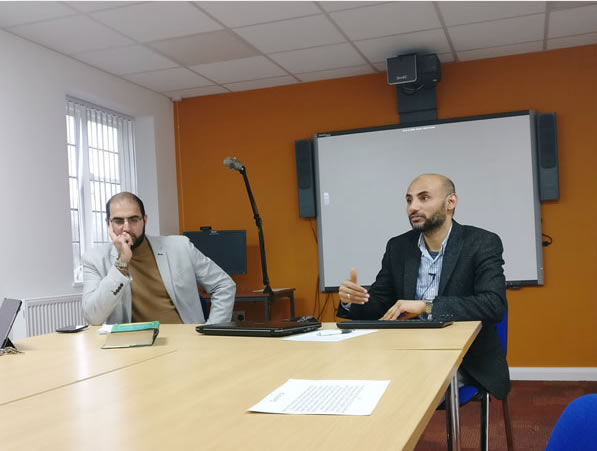 On Thursday 19th October 2017,  Al-Mahdi Institute held a Research seminar on the topic of; “Gender Violence and Qur’ān 4:34: An Interpretive Analysis between Tradition and Modernity” conducted by Shaykh Mahmoud Ali Gomaa Afifi from Lancaster University. The seminar was attended by AMI students, faculty and many interested members of the public.

An abstract of her research reads;

“Qur’ān 4:34 is one of the most controversial verses particularly in our present time, as it discusses a number of critical family issues such as financial responsibility (nafaqah), family leadership (qiwāmah), and the discipline of “nāshiz” wives. The end of the verse addresses the issue of “nushūz” and literally says that if a wife commits nushūz against her husband, then he could sequentially approach her in three ways: he might counsel her, abandon her in bed, and finally “beat” her.

The following lines argue that the failure to attain a consensus on the interpretation of Qur’ān 4:34 is inherent in the methods developed by its different interpreters. These methods are mostly influenced by the different contexts used by the interpreters themselves. Consequently, these interpretations may fall short of fulfilling what they are made for within different realities. While the traditional methods deal with the Qur’ānic text as piecemeal and, consequently, fail to harmonize legal enactments with the holistic ethical view of the Qur’ān, the neo-modern methods are yet to develop coherent treatment of the Qur’ānic text in its totality, insofar as such methods are based on the dulaity of universality and particularity duality, the duality according to which the interpretation of a Qur’ānic text serves as a historical contextual expression based on the general ethos and universal intents of the Revelation.”

SSF: Karbala in the midst of History and Narrative: Typology of Genres of Maqatil