HomeLatest NewsNewsLecture by Shaykh Arif: The Meaning of Death 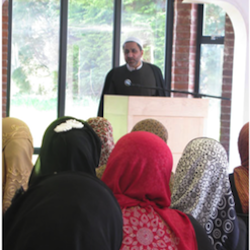 he Al-Mahdi Institute held an outreach event on Saturday 27th April 2013. The event brought together around 50 ladies, all over the age of 40, from the local community who had requested a lecture on the topic of death.

An enlightening talk was delivered by the director of the Institute, Sheikh Arif Abdulhussain, who highlighted some of the misconceptions that people have about death. It was followed by a Q & A session, and a tour of the Institute, which some described as, “peaceful, overwhelming and very inviting”. They were taken aback with the potential they saw and wished the Institute great success in its goals. Food was served which also gave opportunity for all present to interact with each other.