HomeEventsCIMS | The Door of Fatima: The controversy over the violation of the House of Sayyeda Fatima by companions, after the death of the Prophet Muhammad

CIMS | The Door of Fatima: The controversy over the violation of the House of Sayyeda Fatima by companions, after the death of the Prophet Muhammad 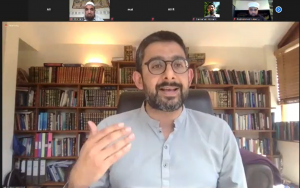 The event’s that ensued after the death of the Prophet of Islam are arguably as important as the events during his life. However, the details of these events can be controversial and are often deeply contested. A case in point is the controversy over the violation of the house of Sayyeda Fatima by companions after the death of the Prophet Muhammad. A historical account is that the second caliph Umar went to the door of Fatima seeking allegiance from Ali, and in some accounts threatened to break it with some contention as to what happened after that point. Did Umar actually break the door and burn it, and what happened after? Was Ali dragged to give the allegiance to Abu Bakr? These are all points of contention both within the Shia and also within the Sunni historical accounts.

A discussion on ‘The controversy over the violation of the House of Lady Fatima’ was held online by The Centre for Intra-Muslim Studies (CIMS) on the 11th of July 2020 with a global audience of Muslim scholars. Presenting a Sunni perspective was Shaykh Umar Ramadhan, the Chairman of Ramadhan Foundation and Senior member of Majlis Shura, having studied with various scholars around the world. The Shia perspective was presented by Dr Shaykh Vinay Khetia, a graduate of the Shia Seminary (hawzah) and an academic who has written extensively with a PhD from McMaster University on ‘History and Philosophy of Shi’i devotional literature’.

Shaykh Ramadhan’s primary premise for his presentation was that historical accounts must be based on authentic narrations– although it could be contested as to whether historical accounts can ever be backed by authentic narrations. Additionally according to him, claimants of such an event occurring in such detail would be defaming a character held in high esteem by Sunni Muslims and therefore, there is an onus to establish the veracity of the claim. Starting with one of the earliest sources detailing the attack on the door of Fatima, ‘Kitab Sulaym b Qays al Hilali’, Shaykh Ramadhan noted that despite some Shia scholars believing in the authenticity of this book, there is some controversy raised by other Shia scholars surrounding its authenticity and even the authenticity of the individual Sulaym as not existing. He then assessed accounts pointing to the occurrence of the event within Sunni sources, arguing that accounts mentioned in Sunni historical books such as ‘Tārikh al Ṭabari’ and ‘Anṣāb al Ashrāf’ are again based on weak narrations.  Shaykh Ramadhan concluded that there aren’t any authentic narrations that such an incident occurred in such detail at the very least, and that it wasn’t logically possible for such an event to happen whilst Ali b. Abi Talib didn’t do anything, a view also held by Syed Muhammad Husayn Fadlallah, a contemporary Shi’i Scholar.

The presentation by Shaykh Khetia started by outlining the event of a confrontation at the door of Fatima being narrated in 251 Shia sources and 88 Sunni Sources. He acknowledged that although the  Sunni sources, such as the detailed accounts of ‘Tarikh al Tabari’ and ‘Anṣāb al Ashraf’  have the problem of missing chain of narrators (irsāl), however the epistemological underpinnings of an individual would influence whether or not they would accept such a historical, something he didn’t go into detail as it was outside the scope of discussion.  The Sunni sources, according to him, do mention that something happened, although they are vague and unclear in the details. Shaykh Khetia also quoted several Shia sources such as ‘al-Kāfī’, ‘Kamil al Ziyārāt’, ‘al-Ikhtiṣāṣ’ and others that mention this narration stemming from the Imams and in accordance with the overall Shia theology. Whilst admitting that there are fringe opinions such as that of Syed Fadlallah, he respectfully disagreed with that opinion and concluded that certainly something vicious did happen to the door of Fatima, however one can’t be certain exactly what it was.

The presentations were then followed by a discussion amongst the scholars, with important points being raised such as the need for compelling evidence to uphold such a serious claim, in addition to Sayyeda Fatima herself not mentioning this event in her sermon claiming her rights (Khutbah Fadakiyya) to the first Caliph. Furthermore, it was evident that theological biases may influence our reading of history, for example the notion that the companions of the Prophet (Ṣahaba) cannot do any wrong would impact the interpretation of history  – something that was acknowledged by Shaykh Ramadhan. Both Shaykh Khetia and Shaykh Ramadhan agreed that that the point of divergence between the two perspectives boiled down to the details of the incident, and hence there ought to be some sort of preferential indicators that should be used in historical studies when there is conflict between multiple historical accounts.

The discussion ended with Dr Alireza Bhojani (co-chair of CIMS) outlining the importance of having such events. Whilst there being a difference of opinion there were points of agreement: