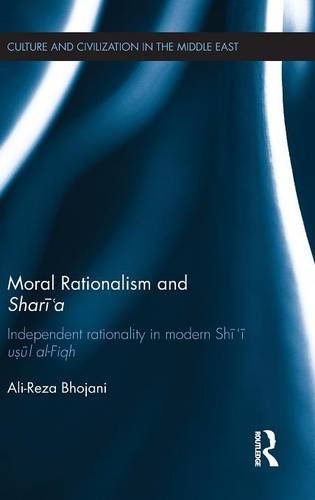 Dr Ali-Reza Bhojani’s book “Moral Rationalism and Sharia”, originally published in 2015, has been recently republished in paperback, and is now a more affordable edition making it available to a wider audience. The work is relevant for anyone interested in the relationship between theology, ethics and law in Islam, offering one of the first detailed accounts in English of how such themes have ben treated in modern Shi’i legal theory.

Abstract:
Within Shi’i works of Shari’a legal theory (usul al-fiqh) there is a theoretical space for reason as an independent source of normativity alongside the Qur’an and the Prophetic tradition. The position holds that humans are capable of understanding moral values independently of revelation. This allows the Shi’a, who describe themselves as amongst the ‘Adiliyya (literally, the People of Justice), to attribute a substantive rational conception of justice to God, both in terms of His actions and His regulative instructions. Despite the Shi’i adoption of this moral rationalism, independent judgments of rational morality play little or no role in the actual inference of Shari ‘a norms within mainstream contemporary Shi’i thought. Through a close examination of the notion of independent rationality as a source in modern Shi’i usul al-fiqh, the obstacles preventing this moral rationalism from impacting the understanding of Shari’a are shown to be purely epistemic. These epistemic obstacles are then revisited identifying the scope for allowing a reading of Shari’a that is consistent with the fundamental moral rationalism of Shi’i thought. It is argued that judgments of rational morality, even when not definitively certain, cannot be ignored in the face of the apparent meaning of texts that are themselves also not certain. An ‘Adliyya reading of Shari’a demands that the strength of independent rational evidence be reconciled against the strength of any other apparently conflicting evidence, such that independent judgments of rational morality act as a condition for the validity of precepts attributed to a just and moral God.