HomeLatest NewsNewsCIMS: ‘Tawassul (Intermediation) in the light of the Islamic Tenet of the Sole Authority of God’ 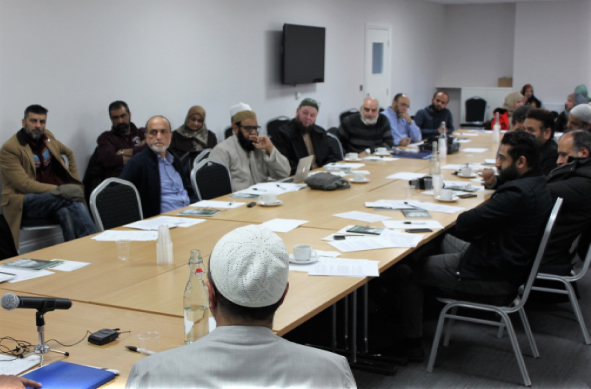 On Saturday 17th March 2018 the Centre for Intra-Muslim Studies held a discussion on ‘Tawassul (Intermediation) in the light of the Islamic Tenet of the Sole Authority of God‘  presented by Dr Khuram Bashir from Green Lane Mosque for the Sunni point of view, followed by a presentation from the Shia point of view by Shaykh Arif Abdulhussain.

Dr Khurram started his presentation on Tawhid with Ibn Taymiyyah’s views on Tawassul and Shaf’aa from his book Qa’ida al Jalila fi al-Tawassul wal Wasila, of which, the main view is that every act of worship is for God. He also went on to acknowledge the different opinions amongst the Sunni schools of thought on this matter. He then touched on the types of Tawhid (al Ubudiyya, Rububiyya, Uluhiyya. al-Asma wal-Sifaat) and that it should be implemented in all elements of life.

The presentations were followed by a Q&A session, with various questions directed to both the Shia and Sunni scholars. Mufti Farooq also offered alternative views amongst the Ahlul-Sunna regarding Tawassul,and provided the justifications for each viewpoint. The Chair, Dr Mohammad Khalid concluded that:

To watch the full discussion, please click on the links below.

SSF: The Authenticity & Efficacy of Dua Tawassul and Dua Nudbah

Research Seminar: "Why so many rules" - Dr Morgan Clarke