HomeLatest NewsNewsCIMS: ”Discussion and General Questions on Imamology and Finality of Prophethood” 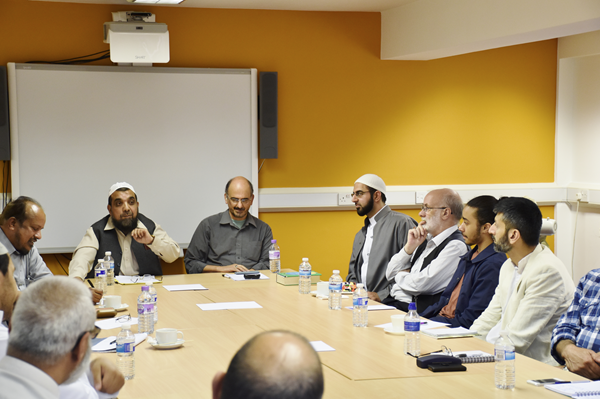 On 8th July at Al-Mahdi Institute, the Centre for Intra-Muslim Studies held a roundtable discussion on the topic ”Discussion and General Questions on Imamology and Finality of Prophethood”. The meeting was attended by eminent scholars and community leaders from both Ahl al-Sunnah and Shia schools of thought. The meeting opened with recitation of Quran followed by a presentation by Dr Abol Qasim Fanaei.

Dr Fanaei looked at the usage of imam in the Quran differentiating between the articles of faith and the articles of the sect. The question of whether Imams are considered by the Shia to be superior to the other prophets (other than the final Prophet (SAW) which all agree was the most superior being ) was one that was raised. One of the oft-raised points regarded the hadith mentioning the likeness of Ali to the Prophet with the likeness of Harun to Moses – was this a basis of the superiority of the Imams over the prophets or not?

– That only Imam Ali is superior to the prophets

– All Imams are superior that the prophets

– All Imams are superior to the prophets except the ulul azm

– The Imams aren’t superior to the prophets

The Imams may be superior to the prophets from some angles whilst being inferior to them from other angles according to some Shia scholars e.g. in the case of Khidr, who was superior that Musa in some aspects, whilst Musa was superior to Khidr from the angle of prophethood

– Believing in the Imams (in terms of Wilāya) is not an article of faith i.e. one can still be considered to be a Muslim whilst not accepting the Wilāya of the Imams

– The superiority of the Imams over the prophets is not a creedal part of the Shia faith i.e. one can still be considered Shia even though they may not believe in t

By the close of the evening it was unanimously acknowledged that the modern notion of takfir has nothing to do with Islam. Rather it has been condemned by both Shia and Sunni, and that no person or sect can be declared as Kafir as long as belief in the articles of faith charted out by the Qur’an are held.

To view more photos from the event click here