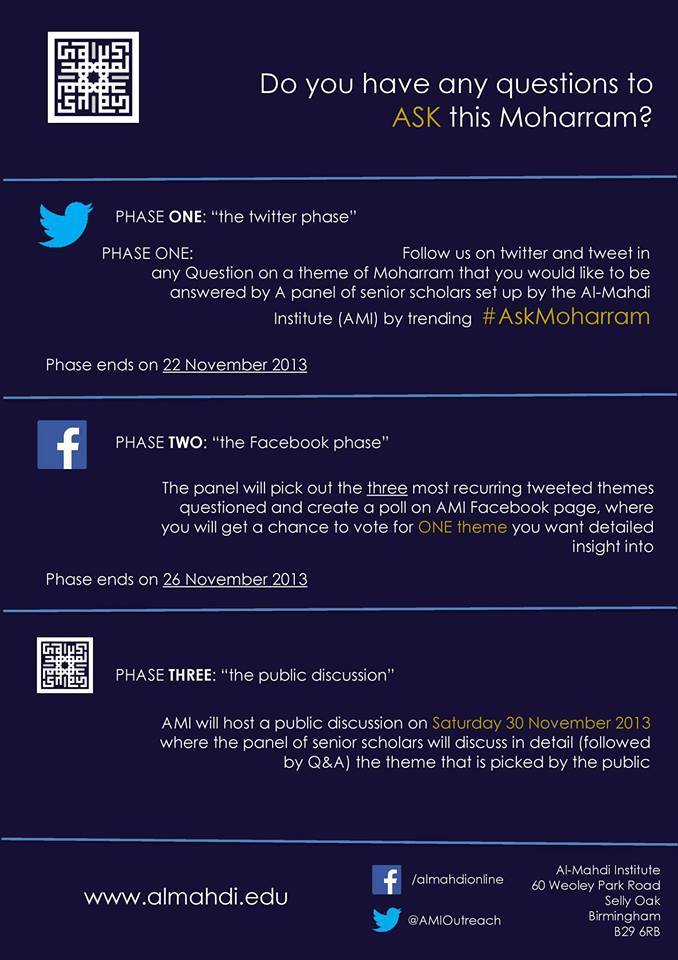 After listening to various lectures every single night during these ten days of Moharram, there may be lots of questions / themes / ideas you are pondering over and would like answer to.

We are giving you an opportunity to get an answer to those questions at a public discussion held at our institute. We would like to know what these questions are, and therefore urge you to ask us your questions on twitter using our handle @AMIOutreach and the trend #AskMoharram

The Event has been divided in to three phases;

Phase one:
The ‘Twitter’ Phase.
The aim of this phase is to engage our audience and allow them to freely express their opinions.
To participate in this phase, all you are required to do is follow us on twitter and tweet in any question on the theme of Moharram that you would like to be answered this Moharram by a panel of senior scholars set up by the Al-Mahdi Institute
For your questions to be considered you will need to follow us on twitter @AMIOutreach, use the handle @AMIOutreach and most importantly, use the trend #AskMoharram.
This phase will end on the 22nd November 2013.

Phase two:
The ‘Facebook’ Phase.
The aim of this phase is to engage our audience, and give them the power to select which theme they want to know about – we deliver what you ask for.
The panel will pick out the three most recurring tweeted themes questioned and create a poll on our Facebook page.
To participate in this phase, you are required to vote for one theme that you would like a detailed insight into.
This phase will end on the 26th November 2013

Phase three:
The ‘Public Discussion’
The aim of this phase is to deliver what you, the audience have asked for.
We will hold a public discussion on Monday, 2nd December 2013 at Al-Mahdi Institute where the panel of scholars will discuss in detail the theme picked by the public on Facebook and then answer any questions you may have. We will try and stream this live for the members of public who cannot attend but would like to join us and ask questions via twitter.

Maulana Dr. Kalbe Sadiq received his early education from the famous madrasa of Sultan ul Madaris. He then moved to Aligarh Muslim University, Aligarh and obtained the degree of Ph.D. in Arabic Literature.

Beside Arabic, Dr. Kalbe Sadiq has mastery over Urdu, Persian, English and Hindi languages. He is an orator par excellence and has traveled across the globe to deliver speeches and lectures on Islamic theology. Among his admirers are the followers of all religions.

Shakykh Arif founded the Al-Mahdi Institute in 1993, and currently serves as its Director and as Senior Lecturer in uṣūl al-fiqh and Muslim Philosophy. Shaykh Arif has been at the forefront of developing and delivering Advanced Islamic studies, tailored toward training students capable of addressing the needs of contemporary societies, for over twenty years. During this time he has also never ceased in his commitment to sharing the Human face of Islam at all levels of society through a combination of his world renowned inspirational and thought provoking public lectures, a long-term commitment to intra and inter faith dialogue and a dedication to encouraging the development of indigenous expressions of Islam throughout the world that can contribute to the pursuit of human development in its fullest sense.