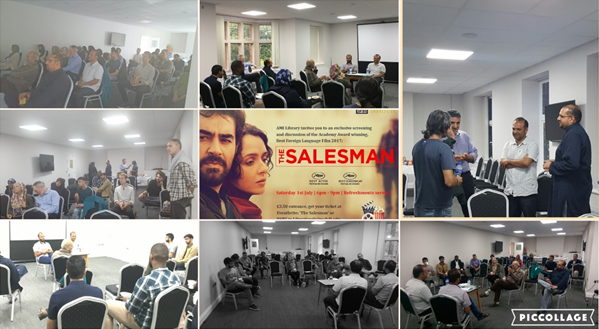 On Saturday 1st July AMI Library hosted an exclusive screening of the film ‘The Salesman’. The Salesman (Persian: فروشنده‎, translit. Forušande‎) is a 2016 Iranian drama film directed and written by Asghar Farhadi and starring Taraneh Alidoosti and Shahab Hosseini. It is about a married couple who perform Arthur Miller’s play Death of a Salesman on stage, when the wife is assaulted. Her husband attempts to determine the identity of the attacker, while she struggles to cope with post-trauma stress. Farhadi chose Miller’s play as his story within a story based on shared themes. The film was shot in Tehran, beginning in 2015.

The film premiered in competition in the 2016 Cannes Film Festival, where it won two awards—Best Screenplay for Farhadi and Best Actor for Hosseini. The Salesman went on to receive more positive reviews, and won the Academy Award for Best Foreign Language Film. However, Farhadi did not attend the 89th Academy Awards ceremony in protest of the U.S. Executive Order 13769.

The AMI library organised/hosted an exclusive screening of this movie. The Event was well attended with a full house. Discussions ensued after regarding the film the acting, direction, emotions, human psychology and the overt and subtle references to taboo subjects. Overall, it was a fruitful event and we had positively glowing feedback.