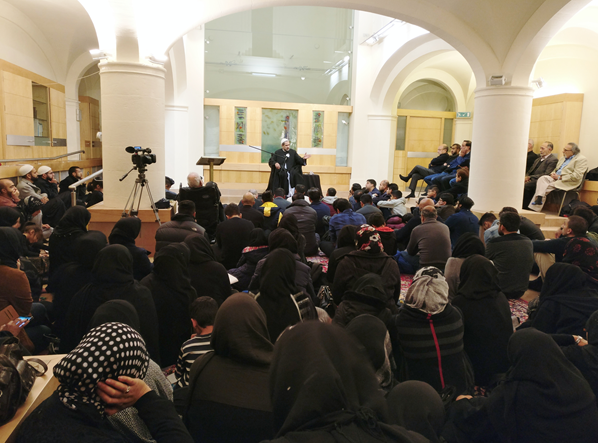 From 1st to 5th November 2017, Shaykh Arif Abdulhussein spoke about ‘God through the eyes of Hussain’ as part of an Arbaeen lecture series at the Al-Mahdi Institute. They were well received with maximum attendance of 300 guests, students and online participates attending the respective lectures. Each night revealed more about the character of Allah through his relationship with Imam Hussain (as). The in depth discussions are a must listen for students of philosophy and religion.

The series opened up with discussion on the personal journey of discovery and self realisation of Imam Hussain and the traits in which we can find within ourselves as well. He spoke about the unique and passionate character of Imam Hussain and his want for establishing truth which ultimately prepared him for his life and lamented death. In examining the personality of Imam Hussain, the lecture established a commonality that everyone has their particular role to play and their personality traits best suit that particular role God has in mind. The remaining nights looked at many levels of Hussain’s relationship with Allah such as his supplications and utterances on different occasions in need, his spiritual journey and the increased intimacy with Allah as the relationship developed. We learn ultimately from the lectures that it was Hussain’s state of humility and indebtedness before Allah, similar to that of a ‘slave to a master.. or the possessor and the one in poverty’ which developed his spiritual journey. Each night of the series unravels more of this deep relationship and we begin to see the further Hussains spiritual journey developed with Allah the more his Godliness manifested until the point where Hussain had no claim over Allah whatsoever. As mentioned in the lectures Allah says ”trust in my discretion, the seas are turbulent, set sail and be ready for your ship to be wrecked….and in that wreckage call out to me and say Oh Lord if this be your will then this be the arc of safety for me. God says if I drown you, then in that drowning find life. If I cut you apart, then in that find well being… be able to give away your control”, and this is where each individuals soul will find peace and it is to this state which Hussain’s life inspires us to reach.

There was a Q&A session at the end of each lecture; those attending were invited to ask questions, and online participates could tweet or facebook their questions for Shaykh Arif to answer.

On the final nights many questions throughout the series were examined and summarised, most of all discussing the need for the relationship between God and creation to be revised. Shaykh spoke of the idea we hold of God creating us and bringing us to the world as naive. He asks do we believe that God is duty bound by everything for us and we are not indebted to him? Like that of a student wishing to study in a place where there are no opportunities; to the one that builds for him a school he will feel eternally indebted. The same way in which our parents nurture us after we choose them for ourselves, and the same way in which Allah created the heavens and earth for our want for life, the nature of the relationship is one eternally indebted and grateful. He also states it is through the lessons in humility of Imam Hussain before Allah that we come to understand this. For a fuller explanation of the lectures please follow the link below to view the series.

To view more photos from the lectures click here