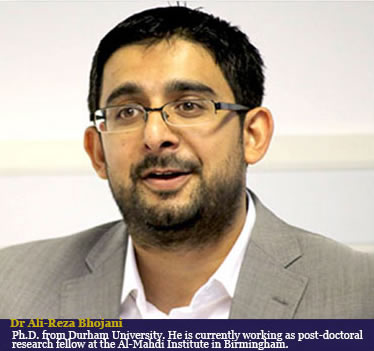 Shi‘a Studies is an academic quarterly produced by The Centre for Islamic Shi‘a Studies. It aims to produce research on traditional and contemporary issues specifically from the Shi‘a perspective and promote a better understanding of the Shi‘a faith, its people and culture in academia and society.

Dr Ali-Reza’s essay is based on his recently published book. It examines the place of rationality in Shi’a belief and practice. The rationalistic foundation of Shi’a Islamic theological discourse (‘ilm al-kalam) is widely acknowledged, based on the notion that reason can be used to justify certain doctrinal views and that there cannot be a contradiction between reason and revelation in Islam. However, as Bhojani argues, in the context of Shi’a Islamic jurisprudence reason as one of its four principles or sources is not sufficiently acknowledged. Reason is used as a procedural tool to deduct wider implications of certain rulings within Islamic law (e.g. the obligation to perform the hajj when capable also implies that necessary travel arrangements, such as obtaining a visa, are an obligation). Yet, possible implications of the basic rationalistic assumption of Shi’a Islamic theology that humans can by the use of their reason identify what is moral and what is immoral are not further explored in Shi’a Islamic legal discourse, as Bhojani argues in his essay and book.

CIMS: 'Who are the Ahlal Bayt? In light of Ahl al-Sunnah Perspective'